WELCOME TO OUR STORE

This story begins with a New York hotel room key. Actress and singer/songwriter, Caitlin Crosby, started wearing the hotel key as a necklace while on tour and had the idea to start engraving old, used keys with inspirational words. Realizing that, in a way, we are all like these keys – unique, flawed, scarred, and sometimes discarded by others – she wanted these keys to have their purpose renewed over and over again.

“KEEP YOUR EYES OPEN TO ALL THE NEEDS YOU SEE AROUND YOU. THEY ARE ALL OVER THE PLACE”

Caitlin always knew she wanted a charitable dimension to The Giving Keys, and within a few months she found the missing link. On a rainy day walking on Hollywood Boulevard, Caitlin saw a couple named Rob and Cera sitting under an umbrella holding a sign that read Ugly, Broke, & Hungry. Caitlin invited them to dinner, where she serendipitously discovered that Cera made jewelry. This was a magical a-ha moment where Caitlin asked them to be her business partners. Rob and Cera joined the team and started making Giving Keys the very next day.

Step by step, Rob and Cera saved enough money for a hotel room, then an apartment, and then a home to call their own! Today, they are living in San Diego where Rob works for the San Diego Zoo and Cera is also employed.

This was the start of our company's passion to help those who have been affected by homelessness. Read more about our impact here.

Today, The Giving Keys are carried in over 1200 stores in the US and internationally including Nordstrom, Fred Segal and Kitson. We are busier than ever making keys for you – our community. Our products are worn proudly and intentionally by individuals from all walks of life who want to be inspired and touch others with their words. 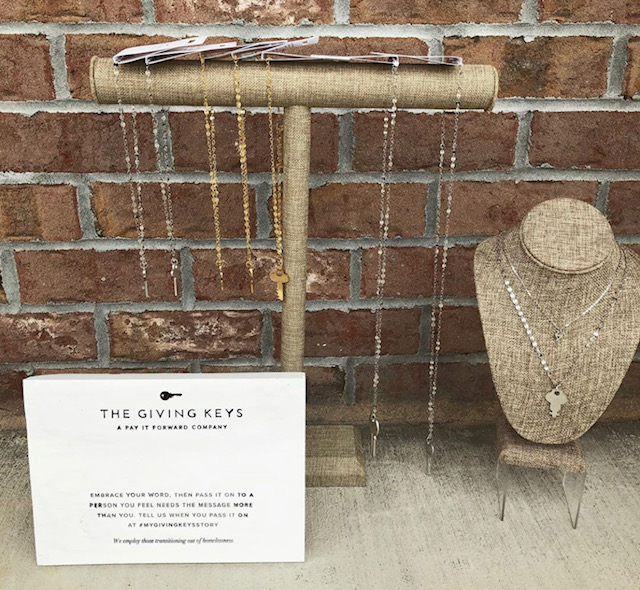 You are here: Home » Products » Accessories » The Giving Key